KDEC wanted to utilise online channels to improve brand awareness. The company also specialises in the installation of solar power systems for homes and business establishments. 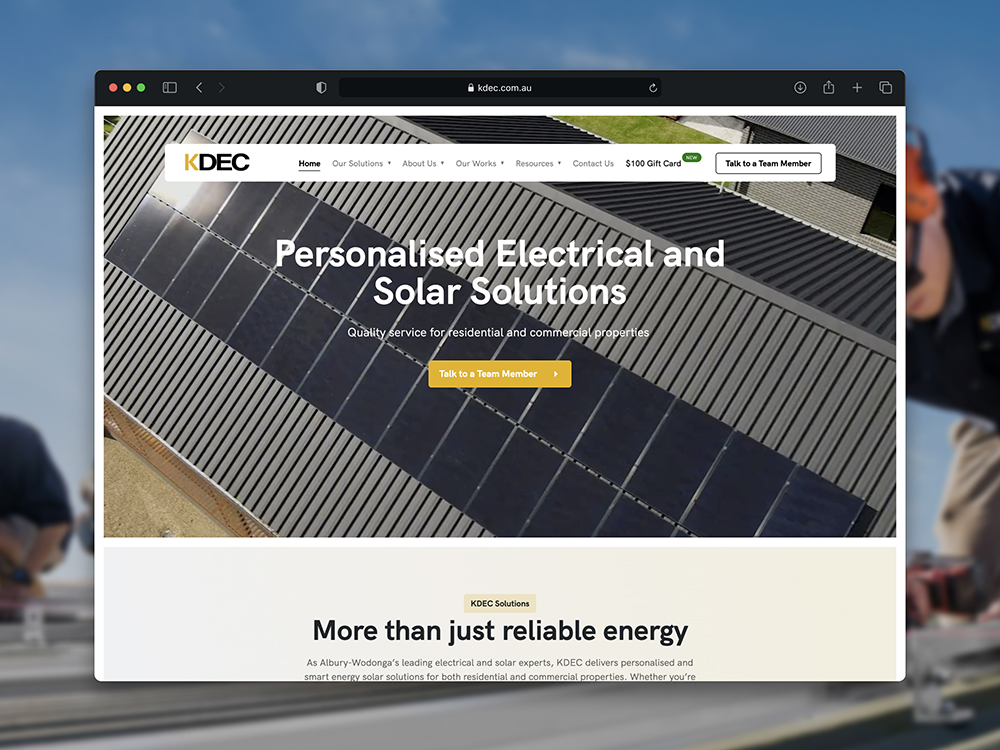 KDEC, which stands for Kaitler, Data, Electrical, Communications, was then purchased by the Walkers in 2008. Through their expertise in business and electrical services, they were able to expand the company’s operations to handle residential, commercial, and industrial projects.

In addition to general electrical services, KDEC also specialises in the installation of solar power systems for homes and business establishments. The configurations of the systems that the company provides are tailored according to the needs and preferences of the clients. Doing so helps ensure that the clients will be able to make the most out of their alternative energy system.

With the objective of helping the local community by providing high-quality electrical services, KDEC was able to grow its brand and its operations through the years. Although the business is scaling, it was still in need of an effective and dynamic marketing strategy aimed at propelling its digital growth.

Like many local companies, KDEC mainly relied on word-of-mouth to reach new potential customers. Many of its leads came from the personal referrals of its previous clients. Although word-of-mouth is still a good marketing strategy that can foster trust in a company, it sometimes isn’t enough to attract new leads and a wider audience. This could cause a company’s operations to stagnate due to not being able to attract new customers.

For a growing company like KDEC, it’s important to utilise new and more effective marketing strategies. Due to the rise of online networks and social media, digital marketing has become the go-to solution for companies and organisations wanting to improve their brand awareness.

This is exactly what we did for KDEC. Through our services, we helped the company utilise various forms of online platforms in order to develop brand awareness. Doing so made KDEC more visible to the people who are interested in what the company has to offer.

One of our major tasks for KDEC was overhauling its website to boost its conversion rate. This provided the company with a way to showcase its services and past projects. More importantly, the site serves as a way for KDEC to connect with potential customers.

After establishing the website, we directed our efforts toward improving its online visibility in search engines, such as Google. We accomplished this through various SEO web design efforts that are tailored to increase the site’s search ranking. One of these involved adding web copies that have SEO-friendly content.

In addition, we also launched a Google ads campaign for KDEC with the help of our PPC specialists. These experts developed targeted ads that focused on the company’s audience or the people who are interested in the services it provides. Through this strategy, we were able to direct quality traffic and high-converting leads to KDEC’s website.

As mentioned earlier, KDEC tasked us with handling its digital marketing. In order to help the company reach its full potential, we utilised different strategies that are designed to improve its brand awareness and attract new leads.

One of the projects we handled for the client was the development of its new website. For this task, we avoided providing KDEC with a generic website that has a template design. Instead, we opted for a personalised approach in order to showcase what the company is all about.

For its site’s layout, we prioritised the content by featuring the most relevant information to site visitors. This involved highlighting the type of projects that the company handles. In addition, we made use of certain web design techniques to make the site more engaging and informative.

By prioritising the content in the web pages, we were able to provide a smooth navigation flow for the site. More importantly, we added interactive features that site visitors can use to communicate directly with the company. Doing so provided the website with an efficient way to convert leads into paying customers.

Aside from the overall appearance of the site, we also worked on its backend to improve its search engine optimisation. Since the company mainly caters to clients in Albury, we made sure that it ranks higher in Google’s search results than its other competitors in the area.

We were able to accomplish this through a number of SEO strategies. One of these includes identifying high-ranking keywords that people often use when looking for various electrical services online. Of course, we only focused on the terms and phrases that are related to the services provided by the company.

We then incorporated these keywords into the content of KDEC’s website. This process involved drafting SEO-focused blog articles and other web copies. Also, we used the keywords for the meta descriptions and title tags of the site’s different web pages. Doing so allows search engines like Google to immediately identify these pages and rank them higher in the search results.

Another major task that he handled for KDEC was the launch of a Google Ads campaign for its website. For the campaign, we defined the company’s target demographics and tailored the ads to attract the attention of the people who are interested in electrical and solar projects and other services offered by KDEC.

We refined our targeted audience much further by optimising the campaign for the area that the company caters to. In KDEC’s case, we made sure that the ads appeared for people who were looking for electrical services in Albury.

Throughout the course of the campaign, our marketing experts guided KDEC in order to ensure that it was able to maximise every dollar it spent on the ads. Through the strategies we used in developing the Google Ads campaign, we were able to reduce PPC costs for this Albury electrical company.

Following the launch of KDEC’s new website in June 2021, we focused our attention on carrying out different strategies that were designed to boost the company’s online visibility. As explained earlier, these strategies revolved around improving the site’s SEO ranking and developing a Google ads campaign.

Through these efforts, we were able to help KDEC appear in the top results of search engines. One of the main direct effects of our actions was the significant increase in the number of users interacting with the company’s new site.

As indicated in the graph below from Google Analytics, the number of users of the site increased by over 50% during the period following the development of the new site. The number of new visitors also jumped to 84%.

The improved online visibility of KDEC’s website also led to an increase in unpaid traffic or organic search, which refers to the people visiting the site after coming across it in Google’s search results. As indicated in the data, organic search jumped by around 23%.

Likewise, referral traffic coming into the company’s site also improved. Referral traffic occurs due to the visits that originate outside of Google’s search results. For instance, a referral can happen if a website refers traffic to another site through the use of external links. In KDEC’s case, its referral traffic improved by almost 42%.

KDEC’s site also experienced a rise in direct traffic following its launch. This type of traffic is caused by the users who are directly searching for the company’s website or entering its site address in their browser’s window. After the development of the new site, direct traffic increased by more than 46%.

Due to the increase in new and returning users visiting the site, more people started interacting with it, such as by communicating with a member of the company. As a result, user engagement from potential leads jumped by 56% during the months following the launch of KDEC’s new website.

The increase in the number of people visiting the website and the improvements in user interactions can all be attributed to the various strategies we implemented to boost KDEC’s brand awareness. Through these different strategies, we were able to improve the company’s online presence by making it more visible to the people who are most likely to avail of its services.

Earth Canvas wanted more people to know about their work. Their objective is to combine the vision of creativity of the farmer and his working palate in the landscape with how an artist sees and interprets the area.